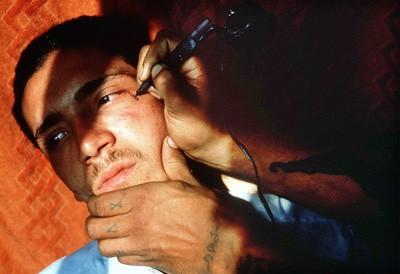 Tattooed teardrops signify the number of killings by members of the 18th Street Gang in Los Angeles, J. Ross Baughman, Life Magazine, 1982.
“Ex-gang members react with tears and laughter when they see themselves without tattoos”, Serina Sandhu, inews.co.uk, 2017.
Steven Burton took portraits of 27 gang members and spent 400 hours erasing their tattoos using Photoshop. The “before and after” photos are being published in the book Skin Deep along with interviews with the former gang members. [...] For the most heavily tattooed people, Burton says he had to imagine what lay beneath and recreate it. In some cases, the photographer had to take photos of himself and his friends and then overlay the subject’s skin. He then painted in scars1 , moles2 and the odd hairy chest. [...] The photographer, who now lives in New York, says he wants to humanise the people caught in gang culture. “When you think about gang members… it’s all about the incarceration, the violence. It’s not about the real people. I was interested in the human beings behind it”, he says. [...] There were tears, laughter and disbelief. Many of the subjects had not seen themselves without a face and body full of tattoos for years. “Everybody had full-on emotional reactions because these tattoos are not fashion tattoos”, says Burton. “They have deep and personal meanings and a lot reflect a lot of the pain3 that these people went through.”
“Ex-gang members react with tears and laughter when they see themselves without tattoos”, Serina Sandhu, inews.co.uk, 2017.
1. a mark from an injury 2. a brown dot on your skin 3. suffering

1-A
Present the “Skin Deep” project.
2-A
What is Steven Burton’s goal?

1-B
Present Steven Burton.
2-B
Why did the subjects react so emotionally?

3
What do you think of this project?
4
Does it change the way you see tattoos? Useful vocabulary: These tattoos are linked to their personal history… It matters a lot to them because… They testify for…

Let’s use what you have learnt in and / or !

As a junior journalist, you interview Steven Burton about his project. He tells you the story of one of the former gang members whose tattoos were digitally removed. He also presents you his new project.