Madame Tussauds is a London museum with wax statues of many celebrities (James Bond, Queen Elizabeth II, etc.). It also exists in 13 other cities in the world from Sydney to Las Vegas. What about Paris?

1.
Identify the city and the characters.
2.
Name the monuments.
3.
Locate these monuments.
London Monuments, Wikipedia.

1.
Listen and identify the characters. What’s the problem?
2.
Spot destinations and directions. Follow the route on the map.
3.
Roleplay the conversation. Use directions.
4.
What is the relationship between Jenny and Mark?

1.
Brainstorm about London transports. Then read and check your hypotheses.
2.
Spot numbers and figures and make an infographic.
3.
Why is the London Underground called the Tube? Explain it to the class.
The London Underground was the first underground railway network in the world. It opened in 1863. Today, there are 270 stations and 400 km of tracks. There are 11 lines, each with a different colour. The London Underground is also known as the Tube because of its circular shape (it looks like a tube). Londoners use a travel card called “Oyster card” to take the Underground and buses, but sportier people don’t use public transportation and get around by bike. Did you know that for two days, in October 2016, carriages drawn by unicorns replaced taxis in the streets of London? London is fun, isn’t it?

Think: Spot the verbs. What do these sentences express?

Practise: Tell a new pupil how to go from the English classroom to the cafeteria.
Page précedente : Ouverture
Getting around London!
Page suivante : Mission 2
At the Tower!
DYS 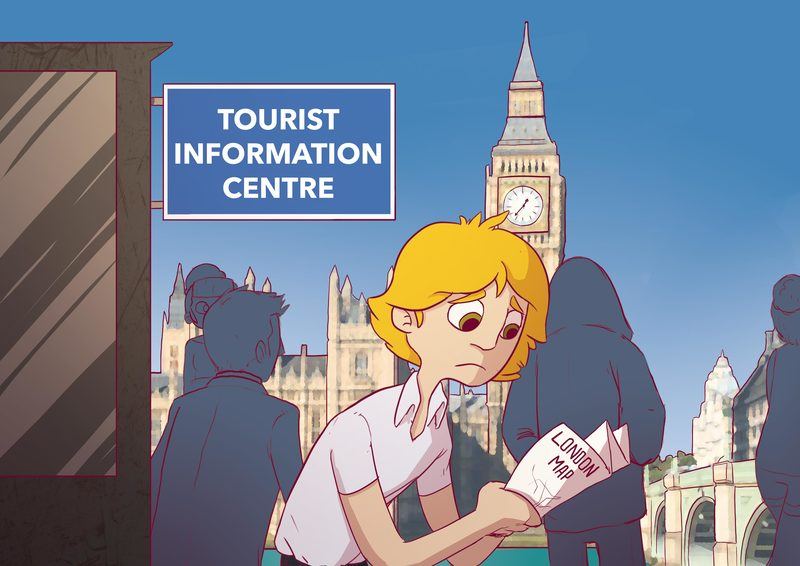 Énoncé
Listen and identify the characters. What’s the problem?

Énoncé
Spot destinations and directions. Follow the route on the map.

Énoncé
Roleplay the conversation. Use directions.

Énoncé
What is the relationship between Jenny and Mark?
Livre du professeur