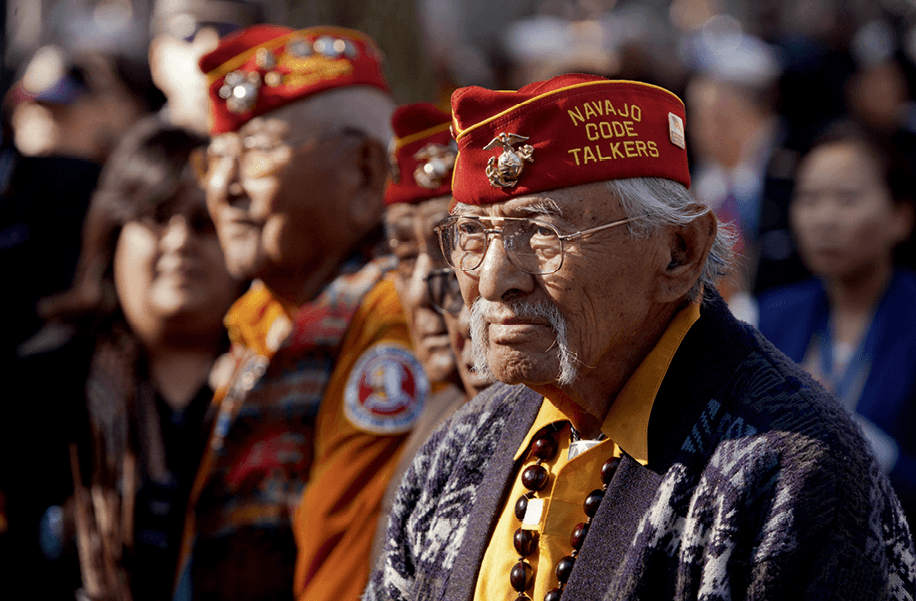 Code Talkers Honored, KOAT, 2018. (Timing: 00:00 to 01:35)
Compréhension de l'écrit
In November 1941, not long before the attack on Pearl Harbor, a handful of letters began materializing in student mailboxes at America's top women's colleges. The messages were cryptic and brief, inviting their mystified recipients to private interviews in which the students might be asked only a couple of similarly cryptic questions: Did they like crossword puzzles, and were they engaged to be married? The correct answer to the first question was yes; the desired answer to the second was no. For more than a year, the U.S. Navy had been quietly recruiting male intelligence officers – specifically, code breakers, or “cryptanalysts” – from elite colleges and universities, and now it was embarking on the same experiment with women. Educated women were wanted for the war effort, and with all possible haste. [...] In the late spring of 1942, the first wave of women recruited by the Navy finished their secret courses and turned in their final problem sets. Those who had stuck with the course and answered enough problems correctly – less than half of those recruited – arrived in fresh cotton dresses, prepared to start their duties, working in the Navy's hot and cramped downtown Washington, D.C., headquarters. [...] Disparate as their backgrounds were, the women who answered the Navy's and Army's code-breaking summonses had a handful of qualities in common. They were smart and resourceful, and they had strived to acquire as much schooling as circumstances would permit, at a time when women received little encouragement or reward for doing so. They were adept at math or science or foreign languages, often all three. They were dutiful and patriotic. They were adventurous and willing. And they did not expect any public credit for the clandestine intelligence work they were entering into. This last fact was perhaps the most important: their work was to be kept entirely secret. Just because they were female, they would not be spared the full consequences for treason in wartime. [...] That millions of women served the war effort by rolling up their sleeves and donning trousers and jumpsuits to work in factories – the celebrated Rosie the Riveter, who helped build bombers and tanks and aircraft carriers – is well-known. Far less well-known is that more than 10,000 women traveled to Washington, D.C., to lend their minds and their hard-won educations to the war effort – and were behind some of the most significant individual code-breaking triumphs of the war. The women came from a generation when women did not expect – or receive – credit for achievement in public life. [...] Their efforts were almost completely hidden for more than 70 years [...]. As it turns out, during the most violent global conflict that humanity has ever known – a war that cost more money, damaged more property, and took more lives than any war before or since – these women formed the backbone of one of the most successful intelligence efforts in history, an effort that began before the Pearl Harbor attack and lasted until the end of World War II. [...] That more than half of these “cryptographers” were women was nowhere mentioned.
Liza Mundy
“The Secret History of the Female Code Breakers Who Helped Defeat the Nazis”, Politico Magazine, 2017.
Questions
a) What is the nature of this document? What is its objective? b) Explain what is presented (Who? What? Where? When?). c) Pick out ten necessary conditions or qualities to be recruited as a female cryptanalyst. d) In which other field did women contribute to the war effort? e) What is implied in the passage from “The women... in public life”? Explain it in your own words.
Expression écrite
Choisissez un sujet et répondez-y en anglais en 120 mots minimum.
Sujet A - Texte
Two of these women, who used to work together as cryptanalysts during the war, meet again 40 years later. Imagine their conversation.
Sujet B - Texte - Vidéo
Without these forgotten heroes and heroines, the Allies would have lost WWII. Discuss this statement.
Sujet C - Vidéo
After visiting an exhibition honoring Navajo Code Talkers, you write a column about your experience. Present the exhibition and explain how it made you feel.