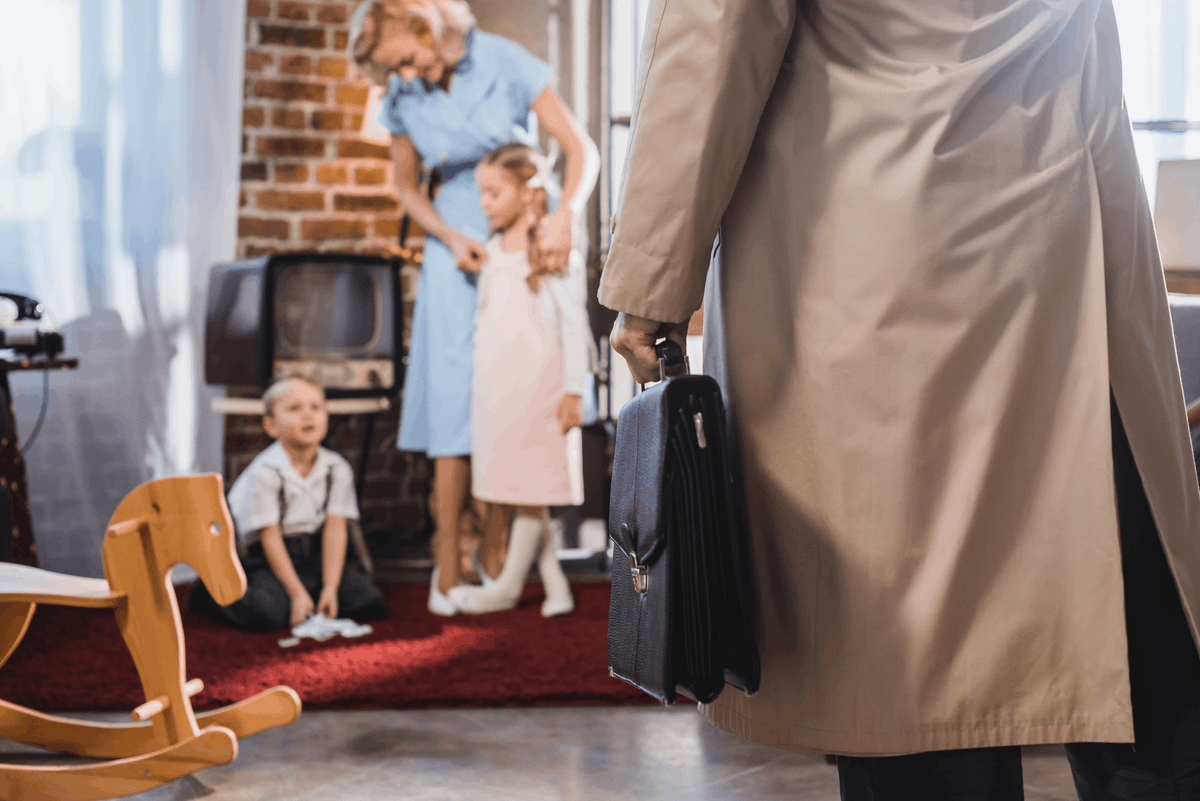 Le zoom est accessible dans la version Premium.
Crédits : LightField Studios/Shutterstock
Expression écrite
Choisissez un sujet et répondez-y en anglais.
Sujet A - Texte
To what extent does TV play a role in shaping our lives?
Sujet B - Texte, vidéo
Discuss the following statement in light of the documents: “As children, we all, in all cultures and societies, learn behavior from observation, imitation and encouragement of various kinds.” - Gary Gygax.
Sujet C - Vidéo
Imagine you are the child giving the testimony about his family life. Write a diary entry about a day in your family.

Compréhension de l'écrit
During the 1950s, television gender roles were stricter and more rigid than they ever had been. The men put on their business suits every morning, went to their conforming jobs, became part of the American rat race, and then were expected to come home and be a father figure and a husband. These were oftentimes the same men that had fought on battlefields of WWII or the Korean War, and now their duties had changed, so that they had to fight Communism at home by being the perfect American man. [...] Boys during the 1950s were surrounded by this rigidity of manhood. This hypermasculine mold that they were supposed to fit into consequently meant devaluing the role of women. It is possible that such television expectations contributed to the development of violent tendencies, because there boys growing up watching the men of the 1950s were not raised to value women, but rather to devalue them to make themselves seem more masculine. The repetitive exposure to these television shows, alongside with the patriarchal society that was solidified even more during the post-WWII years, created a highly constructed identity for men in America. [...] There was a lot of pressure on the boys to grow up as men, being ridiculed for any behavior that was not masculine and knowing that they would one day be the primary breadwinner for their family. There was also a clear gender difference growing up as boys in the 1950s, and since they were raised in a way to devalue “women's work” they did not see girls and women as important parts of society. [...] Through the 1950s television shows, boys were shown that to be real men, they had to follow rigid norms. These shows display clear differences between men and women, with women as subordinate. Some of the most popular television shows during the 1950s were The Adventures of Ozzie and Harriet, Leave it to Beaver, Father Knows Best, and I Love Lucy. The plot lines were never dramatic and the issues were mundane. There was never any stress and problems could be fixed fairly easily. Things seemed to run smoothly in the lives of these Hollywood families, because they all had a role to play. The father was a working man who left in the morning and came back at night, ready for his wife to serve him dinner. The fathers were not depicted as frequently as the rest of the family, because the storylines centred on the home. Since men spent the majority of their lives outside of the home, and were not involved with household chores, the dominant screen space was reserved for women and children. In the show Leave it to Beaver, the story comes from the children's point of view and the father, Ward Cleaver, is only depicted before he leaves for work, when he comes home for dinner, or when he is solving the problems of his two sons. It is the absence of the men in the house in these television shows that reinforces that boys and men simply do not belong there. On the other hand, the mother/wife figure, who stayed at home, figured prominently. These women, such as Lucy, Harriet, and June, “portrayed the same general character - ‘a woman with a smile on her face and a trick up her sleeve, who is submissive yet controlling” [...]. These were the women who knew their place in the home. On the occasion that they tried to experiment with work, it was a comedic episode, because it wasn't her “place.” When young boys turned on their television sets, they would have seen the outline for what men and women are supposed to do. It is this mindset that there is no fluidity between the two gender roles that can have negative consequences to the socialization of children.
“Masculinity, gender roles and T.V. shows from the 1950s”, The Artifice, 2014
Questions
a) Present the historical context of the 50s. How has the role of men evolved in the past decades? b) How were men expected to be? What was their relation to women? Why? c) Where did most of the action of these TV shows happen?
d) What were the roles of men characters in TV shows? What consequences on the boys'education? e) How were women depicted? Why? f) Explain the sentence in bold letters in your own words.